Every Tuesday I get an email from Marie Forleo. She is one of my FAVORITE people on the internet right now. What I love the most about Marie TV is her tagline. She ends every show with, “Keep going for your dreams, because the world needs that special gift that only you have.” And I have to admit, I think there are days that I watch her videos JUST to hear that tagline.

Then yesterday I got an email back from Fishhook and wouldn’t you know it, the tagline to his last email said, “Because who you are, and the work you do matters.”

Then while reading today’s Word of the Day the phrase “illuminate the way they should go” stood out to me. It is the way of the Lord to lead us. It’s just what He does. He always has and He always will. And it’s our blessing to follow His lead and see where He takes us. Jeremiah 29:11 tells us that God has plans for us, plans for hope and a future. He created each and every one of us with a purpose, a goal in mind. 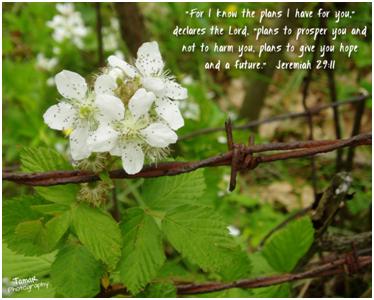 There’s another phrase I’ve heard tossed around a lot when people are talking about doing work for the Church they’ll say, “I’m attending to the Lord’s work.” That phrase has never bothered me until lately, as in, since I’ve been called away from my desk and computer and out into the “real world” to “go to work”. For the last seven years I’ve felt like I was doing “the Lord’s work” aka, ministry. And the thought of being called away from it killed me. It took nine long grueling months for me to come to terms with something. It’s ALL the Lord’s work! The only difference between doing something for my boss and doing it for God is the state of my heart when it’s done. It is COMPLETELY possible to do something for God by doing something for my boss. God made me for a purpose; He made me for a lifetime filled with tasks and accomplishments according to His plan. And believe it or not, He made me for a lifetime filled with mistakes and mishaps and blunders in mind too because He knew in His infinite wisdom that those mistakes, mishaps and blunders would lead me to where I needed to be and would put me in the right frame of mind and heart for when I got there too.

I have wanted nothing more than to be a teacher my entire life. It was a longing that started in Kindergarten and has never gone away. It’s who I am. It’s who I was made to be. God put that in me for a reason… He wanted me to be a teacher! Does that mean that my work as a teacher is any less important and critical for the Kingdom of God than that of a preacher? I used to think that it did, I was wrong. God made me to teach and if I’m not teaching then I’m not fulfilling the role God created me to fill. Just like if a preacher isn’t preaching they aren’t fulfilling the role God created them to fill – leaving that role, and all its duties, empty.

God created you with a dream deep in your soul, something that you long to do. You may not get paid to do that thing, and you may not get to do it all the time, but if you’re never doing it, then you’re not doing what God made you to do. The world NEEDS for you to do that thing you were created to do. When God planned it, He had you in mind. Think about that for a while. There are things in this world that you are the only one who can do them completely according to the way God planned them.

Things done for the Lord are never wasted. Turn your dream into a goal and go for it!