“Thus declares the LORD, who stretched out the heavens and founded the earth and formed the spirit of man within him.” Zechariah 12:1

It’s funny, I just sat down all prepared to tell you all about verse five from chapter twelve, “The inhabitants of Jerusalem have strength through the LORD of hosts their God.” And how tired I am, but God is giving me the strength and determination to carry on. But then I opened my computer and the rotating background picture changed to this: 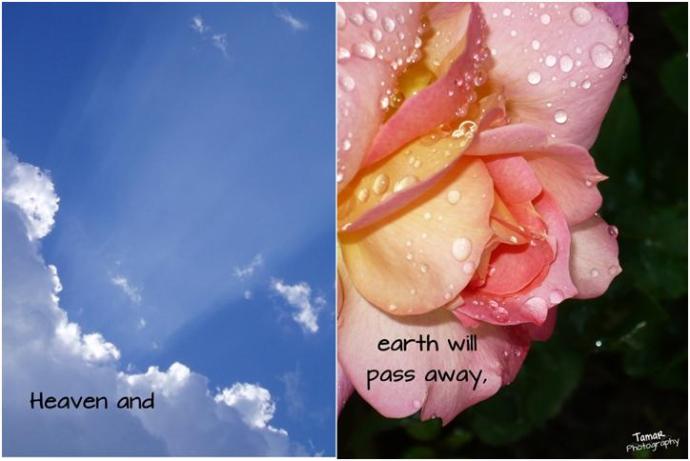 And I knew I wasn’t just going to be writing about how God strengthens us.

Today’s reading was a lot of end time prophecy, things that most of us don’t think about that often, and I was planning on avoiding talking about them. 😉 Mostly, because they’re hard to talk about, partially because they’re hard to understand, but mostly because they scare me. It’s a lot of talk of misery and people suffering and being raped and pillaged, it’s like watching the news, I just don’t want to have my mind filled with these images. But then God gives me this picture and its beautiful message.

It’s not going to last forever.

The pain you’re in, the struggle you’re going through, the heartache you’re experiencing; it’s not going to last forever. Heaven and Earth WILL pass away, but His Word will NEVER pass away – not ever. Period. There is an eternity waiting for us on the other side of death’s door. There is a reality that is more real than our present reality, you’ll see. And the good years there will come and swallow up the bad years so completely that you won’t even be able to tell that the bad years even existed. The only place they will exist is in your memory.