Philemon & Philippians
“And I am sure of this, that He who began a good work in you will bring it to completion at the day of Jesus Christ.” Philippians 1:6

Today is a good day because I today I finished my kaleidoscope!

She’s got at least 48hrs in the squares, 24hrs in sewing them together and then about an hour and a half in the edging. She’s heard a multitude of sermons on how much God love us and she speaks that out in each square being a different color. As varied as they each are, together they tell of the different colors of His love for each of us. Sometimes His love looks dark and brooding while other times it’s light and cheery.  But sewn with love and prayer together they make a covering that protects us from the cold harsh world around us. Each square holding tightly to the one next to it they form a thick barrier that warms the heart just as much as the body.
Yes. It’s just a blanket. But at the same time it’s SO much more. It’s a symbol of a love that surpasses all understanding. It’s a gift that never stops being given as long as it continues to be used.
God’s love was never meant to be put on a shelf to be looked at. It’s meant to be received as a gift and used day after day. His love covers over a multitude of sins,; yes even your worst ones.
He began a good work in you and He will continue working it in you until it is finished – and not a moment sooner. He won’t give up on you. I promise.

Sewing the Squares Together:

The first thing I did was to sort the squares.  As I was making them I had tied them into groups of ten to make counting easier. I knew I wanted the completed blanket to be 4 feet square. So I made a test granny square and measured it at approximately 2.5in square.
Next I figured up the math:
I converted my desired length into inches: 4ft = 48in.
Then I converted my inches into squares: 48in length ÷ 2.5in granny squares = 19 granny squares per side.
Then I multiplied my length in squares by my width in squares to get my total squares needed: 19 squares × 19 squares = 361 squares total needed to make a 4ftx4ft blanket.
I had my work cut out for me.

Once I had double checked that I had the correct amount of squares completed I cut all the bindings loose and mixed them all together in a large paper bag. Aren’t they beautiful! 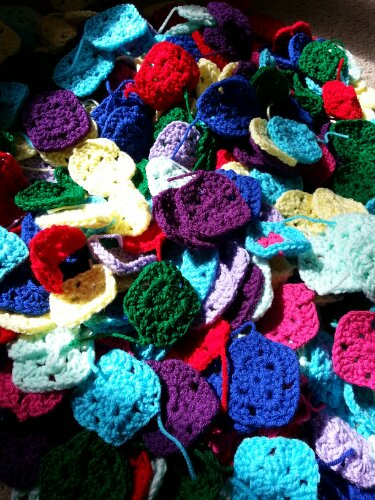 I wanted the pattern to be completely random so as I sewed the squares together I would draw the next square out of the bag. My only rule was that two squares of the same color couldn’t be above, below, to the right or the left of each other; but diagonal was ok.
I used a whip stitch* to join them going ONLY through the back loops. I started at the corners where the chain (CH) stich is. 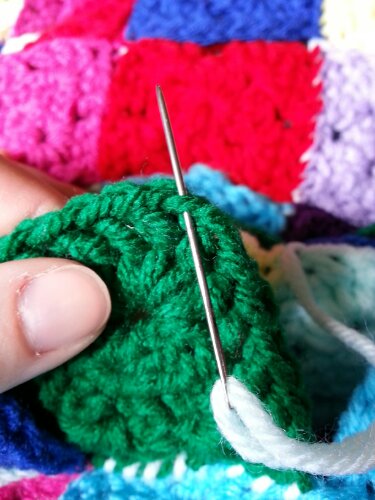 Join the squares corner to corner with a cross stitch type “X” to secure them so that they don’t migrate down the whip stitch.

Work ONLY in the back loops of the square so that you get a nice “invisible” joint between the squares.

In last week’s granny square tutorial I told you to pull the last chain stitch tight which would make a knot. In joining the squares I found it worked best to start with the corner nearest the knot so that I could then whip stitch right over the knot and the tail making sure that the knot faced the back of the blanket.

By doing this part first when I went to whip stitch the vertical columns of squares it went MUCH faster because then all my squares were facing the same direction so my stitches all lined up neatly AND I didn’t have any tails to worry about anymore. 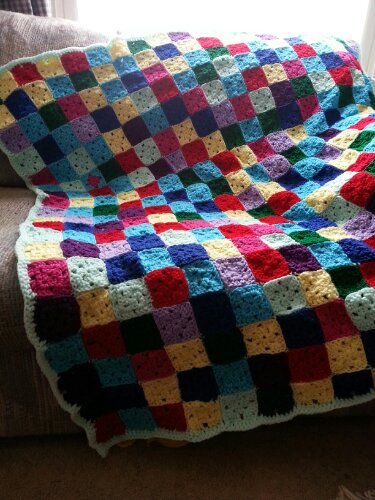 With the edging I tried to do a granny stitch style edge but it didn’t look quite right. It made the squares look like they were continuing on rather than stopping at the edging. I had worked so hard at making all their edges look straight and lined up I didn’t want to ruin that with the edging. So I switched to a double crochet (DC) in each stitch around, including the “hole” created by the chain stitch spaces. At the corners I worked (3DC, 2CH, 3DC) into the CH space of the corner square. Joining the final DC with a slip stitch to the first DC. Finish off and weave in the tail. Tada! A finished work, a long time in the making!

*Note: to make the blanket two sided you could use a slip stitch or even a single crochet, worked in the back loops only, to join the squares. I actually would have done this but didn’t think about it until I was already halfway through whip stitching and at that point I wasn’t going back!

Categories: 365 Life, Crochet Tuesday, Jesus Loves YOU, Philemon, Philippians, Writing Through the Bible in a Year | Leave a comment