“Behold, like a lion coming up from the thicket of the Jordan against a perennial pasture, I will suddenly make them run away from her, and I will appoint over her whomever I choose. For who is like Me? Who will summon Me? What shepherd can stand before Me? Therefore hear the plan that the LORD has made” Jeremiah 50:44-45a

Over the last three days, I’ve been working feverishly on a mermaid costume for my daughter, and then writing out the pattern to it for anyone who might be interested in it. I’ll be honest; part of my motivation is a hope for an increase in readership. But another part of my motivation, the majority of it in fact, came from my Sabbath rest with God. That day I lay on my couch half asleep, half meditating, when my thoughts fell toward my daughter and how desperately she wanted that Ariel costume in the store a few days earlier. But she was getting a new pair of shoes and so I had to say, “no” to the costume. L It broke my heart just thinking about it. Then my thoughts turned toward the crochet basket a mere foot from my head. I could MAKE her an Ariel costume!

And the longer I thought, the more it sank in how much I LOVE crochet. I’ve been doing it for a hobby off and on for almost my entire life. My mom taught me when I was young and I’ve been doing it ever since. Mostly blankets and scarves until Pinterest came into my life a few years ago! That’s when I started realizing how many things you can do with crochet! I was amazed! My eyes had been opened.

For the most part I’ve hand crocheted almost every gift I’ve given since then. (I need to start doing some hand stretching exercises because Christmas is coming ya’ll!)

Anyway, this got me thinking. If I love crochet this much, and all those people on Pinterest love crochet this much, maybe they might like MY crochet, dashed in with as much word of Truth and personality as I can infuse into it of course. I’ve been told by several people that I should sell my crochet creations. And while super sweet of them, I’m not sure that I have that kind of time to spend actually making all these things. But I can spend a bit of time writing out the patterns and sharing them with people… and maybe putting them on a crochet site or two for a bit of profit.

Plus, it also got me thinking about you all. I mean, crochet is just one thing in this life that I love. And isn’t it the things that we love that make up a huge part of who we are? And that’s what this blog has been all about from the very beginning; me sharing with you who I am. God is, of course, the biggest, most important and critical part of all that. However, He isn’t the only aspect of my life. I have my family and our funny anecdotes too.

A fun one from today was the pulling of Anna’s loose tooth. Do you remember me telling you about it back in Baby Teeth? Well tonight it finally came out and Anna was almost literally bouncing off the walls she was so excited about it. 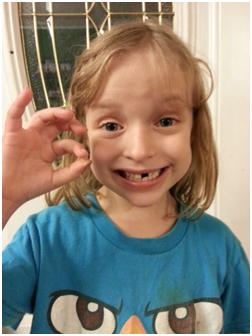 You know, it’s not every night that the Tooth Fairy comes! Well, the tooth got “conveniently” pulled right before she went to bed so as she literally JUMPED into bed she shouted, “Tooth fairy, I want a LOLLIPOP!” and then snuggled down between her covers. I sat down next to her and said, “Really? You want a lollipop? You don’t want money?”

I said, “Oh. OK then.” And kissed her on the forehead. And after thinking about it for a second she said, “I think I would like a lollipop AND money.”

Seriously. Could she be any cuter? I mean really? 😀

So after I put her to bed I raided our candy stash, no lollipops. Not even any suckers! So at 8:45 at night I jumped into the car and ran up to the Dollar General to see if they had any lollipops.

Oh LORD, thank you for the super kind lady who helped me find them! When I told her what I was looking for and why she directed me to a box of lollipops that are easily 2 ½ inches in diameter! I can hardly wait to see the look on her face when she sees those babies under her pillow!!!

Earlier in the evening she had come to me and asked me to wiggle it, just to see how loose it had gotten. It was to the point that one or two good pulls and it would be out. So I asked her if it was OK if I tried to pull it. She excitedly said, “SURE!”

Well, one good pull and she backed away from me and said, “Mommy! That hurt!”

I said, “Sweetie, it’s going to hurt just a little bit to get it out. But it will only hurt for just a little bit. It won’t be long. And then you’ll have that cool hole in your mouth that you’re tongue loves to play in AND the Tooth Fairy will come tonight!”

Well, at that moment she wasn’t interested in any more pain, no matter how brief. So I let the matter drop. But even in that moment I was already thinking about those “Baby teeth” in our lives that God is working on wiggling and jiggling and preparing us to lose them in order to make room for something bigger and more permanent. I just had to smile.

Did I mention that when I left Dollar General, I didn’t just leave with one lollipop for my daughter with the now gaping hole in her mouth? No. I wanted to make sure that I, A) overwhelmed her with the generosity of the Tooth Fairy and B) was fully prepared for the next time the Tooth Fairy needed to come, because now I know that Anna expects for her to bring lollipops when she comes. So when I checked out at Dollar General, I had TWO of the BIG lollipops and SIXTEEN smaller lollipops! I bought more lollipops than she has baby teeth left in her head!

And you wanna know what I kept thinking while I was buying them.

“To Him who does exceedingly, abundantly, above all that we could ask or imagine.”

God doesn’t just meet our needs and many of our wants, He EXCEEDS THEM! Abundantly above all that we could ask or imagine. I asked him for a dog. Not just any dog, but the perfect dog for our family. And we got him! I asked for God to fix my husband and my marriage. I didn’t get what I asked for; I got MORE than what I asked for!!! He is SO GOOD and He loves us SO MUCH that when we ask for the mermaid costume in the store, He says, “No”. But not because He can’t afford it, He says no because He knows that He has something much much better in store for us. He wants us to watch Him for the next few days, crochet something just for us. We get to watch it grow and change and take shape into something really beautiful and exactly what we want. And if there’s something about it that we’re worried isn’t going to “cover us” enough (like Anna’s top to her costume” then He puts it aside and makes us another one; just because He can. We might have to wait a little longer, but that’s OK sometimes.

Yes, we have a very good Heavenly Father who loves us exceedingly, abundantly, above all that we could ever imagine.

Have a blessed day in the LORD my friends! I love you!!! Thanks for listening as I ramble on about my crazy life one day at a time!

Categories: 365 Life, Jeremiah, Jesus Loves YOU, Writing Through the Bible in a Year | Leave a comment