I think if I read the word “whore” one more time in today’s reading I was going to go scrub my eyes out with soap! YIKES ISRAEL!

There was no denying or second guessing how God felt about their actions! Yet at the beginning of the sixth chapter of Hosea the Israelites speak out their understanding of how God works, and this is where I think we should pay extra close attention today.

“Come, let us return to the LORD: for He has torn us, that He may heal us; He has struck us down, and He will bind us up. After two days He will revive us; on the third day He will raise us up, that we may live before Him. Let us know; let us press on to know the LORD; His going out is sure as the dawn; He will come to us as the showers, as the spring rains that water the earth.” (6:1-3)

Why was it that the LORD allowed their enemies to defeat them?

Later on in chapter eight the LORD explains the purpose of His tactics: “I will send a fire upon his cities, and it shall devour her strongholds.” (8:14) In this pronouncement, there is a physical meaning and a spiritual meaning. The physical meaning is obvious, there will be a physical fire in the cities that will destroy their physical strongholds, or the places where the enemy armies will target first because once those areas of the city are secured they will have control over the entire city. The same is true for the spiritual meaning. Let’s start with investigating the fire that will come.

What was the fire? The presence of God. And what was it for? To give them light so that they may travel by night. And did His presence ever leave them? Nope. God was a pillar of fire by night in order to give them light so that they could travel by night. And He never left them alone forcing them to travel in the darkness. What a great God we serve!

In Deuteronomy 4:12&24 we read, “Then the LORD spoke to you out of the midst of the fire…. For the LORD your God is a consuming fire, a jealous God.”

Here we find that our God speaks through the fire that brings us light in our darkest moments. He is jealous for us; His love for us is a consuming fire!

And then in Acts chapter two we see the promised Holy Spirit come as “divided tongues as of fire” and “they were all filled with the Holy Spirit and began to speak in other tongues as the Spirit gave them utterance.” (2:3-4)

It is after the cross that we finally see the fulfillment of so many promises spoken so long ago. Here in Acts at the moment of Pentecost we see the pillar of God’s all consuming fire coming and resting upon the heads of each believer and filling them with His presence, never to leave or forsake them EVER AGAIN! AND causing them to SPEAK! His Spirit gave them utterance, He gave them the ability to speak His word of Truth to the lost and broken the downhearted and depressed. His Spirit came to speak to them individually, straight to their hearts in their darkest hours, never to desert them and leave them stranded in the wilderness of the valley of the shadow of death. If that doesn’t give you hope today I don’t know what will! But wait, there’s MORE!

Strongholds! There’s a secret Truth buried in the story of Sharach, Meshach and Abednego; the all consuming fire of the Holy Spirit destroys strongholds! In Daniel chapter three we find our three heroes standing before the furnace of Nebuchadnezzar refusing to bow down to his idols.

“Then these men were bound in their cloaks, their tunics, their hats, and their other garments and they were thrown into the burning fiery furnace. Because the king’s order was urgent and the furnace overheated, the flame of the fire killed those men who took up Shadrach, Meshach, and Abednego. And these three men, Shadrach, Meshach, and Abednego, fell bound into the burning fiery furnace.

These brave men were unshakable in their faith that God would save them, one way or another, either from the fire altogether or through it to death and to Paradise. They held fast to their belief that their God is so good that no matter what happened to their bodies; He would redeem their lives in the end.

When they were thrown into the furnace, the fire was so hot that it consumed the men who threw them in! Consider this; in those hot situations of life where you feel like you’re in a pressure cooker because of something someone in your life said or did, picture yourself in the furnace of God’s all consuming fire. Those people who threw you in are being exposed to its flames as well. And the one who ordered you in, but perhaps didn’t throw you in himself; he is watching how you fare in that fire!

Your reaction to the flames could very well save the very people who threw you in in the first place! And here’s the beauty of the fire of God’s Holy Spirit, when we are in the fire of Christ, the things that were binding us before are being burned off. And because we have His fire inside us, we can walk back out of those hot situations unscathed from the flames. In Hebrews chapter twelve we read,

“At that time His voice shook the earth, but now He has promised, ‘Yet once more I will shake not only the earth but also the heavens.’ This phrase, ‘Yet once more,’ indicates the removal of things that are shaken -that is, things that have been made – in order that the things that cannot be shaken may remain. Therefore let us be grateful for receiving a kingdom that cannot be shaken, and thus let us offer to God acceptable worship, with reverence and awe, for our God is a consuming fire.”

God uses the things that come against us in life to shake the things that have been made. He shakes the earth under our feet so that the idols we have placed on the shelves of our hearts come tumbling down to the ground leaving only the unshakable things – His Word and His Holy Spirit. Your world may be on fire today. Is it all around you or is it in you? Don’t allow the fires around you to frighten you, they are ONLY meant to burn off the cords that bind you. They are meant to destroy the strongholds in your life that keep you from trusting God alone for your salvation. They are NOT meant to harm you or to hinder you; they are intended for your good and for the saving of many lives. They are meant to shake down the shakable, and leave the unshakable; the Truth of God’s promise to NEVER leave you or forsake you. Allow His consuming fire to light the darkness that surrounds you and presses in on your consciousness. Hold the flaming Light of His word up to your situation today and tell the darkness to flee in Jesus’ name! You are in His fire and His fire is in you and that makes YOU unshakable! 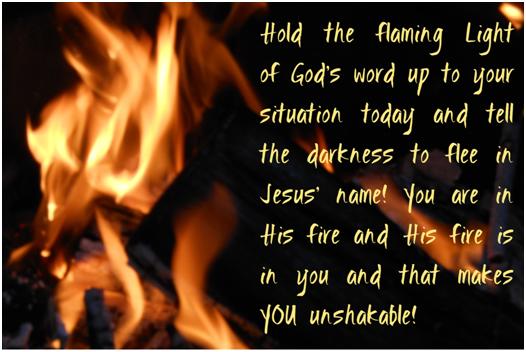 Categories: 365 Life, Hosea, Writing Through the Bible in a Year | Leave a comment