I am so blessed to have friends who love my kids! This morning my friend Cindy came and picked up both my kids for a three-hour play date. The moment they were out the door I grabbed my camera and was out the door myself. A sunflower in the neighbor’s driveway had been calling my name for days now and I finally had the opportunity to heed its call. As I briskly walked I kept my eyes rolling around in order to make sure I didn’t miss anyone else who might beacon me for a closer look. There is just something about the morning sunlight that is simply magical. It makes everything look and feel fresh and new. That’s why it’s my favorite time of day to photograph.

Upon arriving in the neighbor’s driveway I was greeted with this miraculous testament to survival. 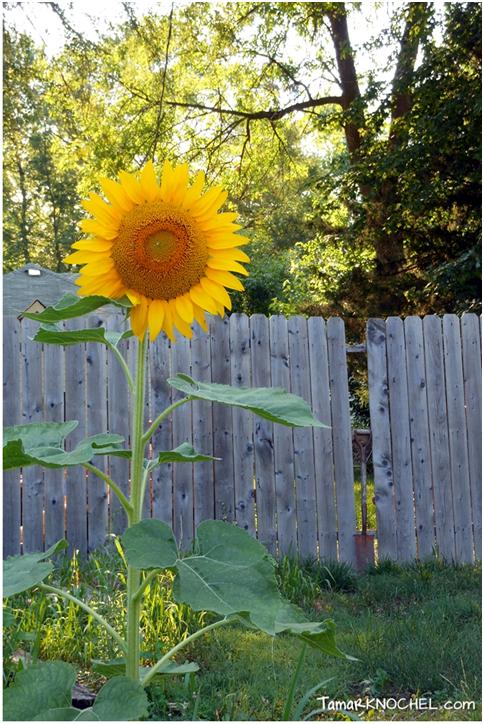 I say miraculous because this flower came from a bag of sunflower seeds that had been baked and flavored. The likelihood of one of those seeds growing is very rare due to the high temperatures of the ovens. So the fact that this little life survived the time in the furnace only to be plopped into a bag, sold as food, chewed up, spit out, covered in enough soil to take root and grow during a drought and then survive being mowed off long enough to even bloom; yeah, this is a miracle sunflower. A life certainly worthy of a photograph or two! 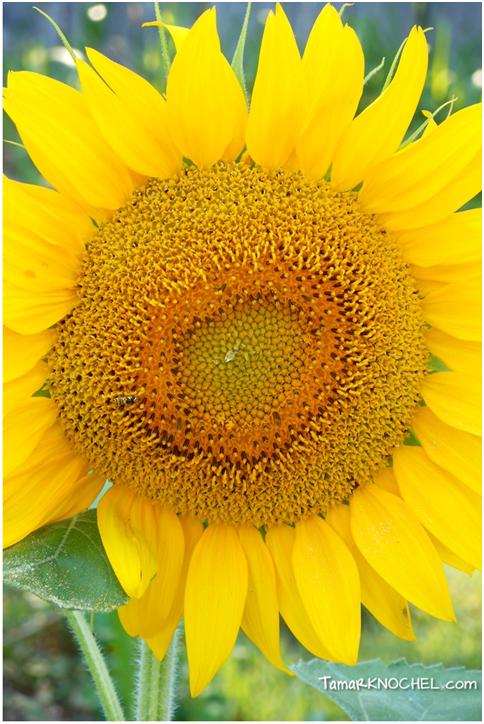 His story is simply inspirational all by itself, but then again, he wasn’t the only one talking either. The longer I stood there circling this beauty trying to get just the right shot, the bees starting coming. One after another these bees dipped their heads deep into the flower’s face filled with pollen and drank deeply from this flower’s sweet nectar. 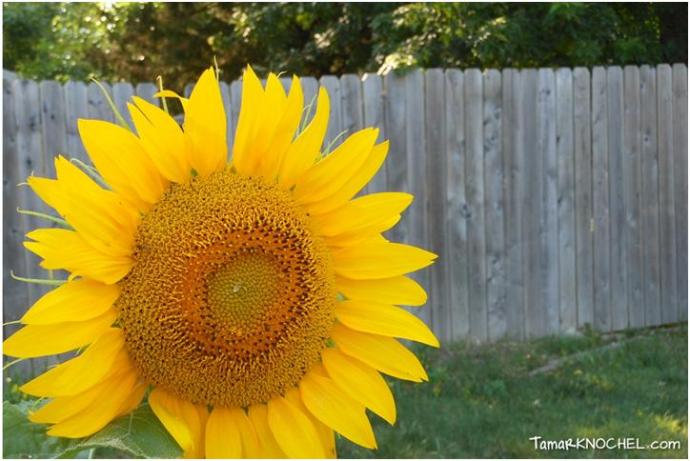 Watching these bees, they shared a very important biblical truth. Our testimonies of survival are nectar for others in their own times of trial. But even more than that, not only is our life story drink for the thirsty, it is seed, pollen for the un-pollinated. When the bee leaves this flower it does not go with a full belly alone, it leaves with hairy legs covered with pollen, which it leaves at the next flower it visits impregnating it in order for it to bear fruit and more seed. Do you know how many times a good story of survival will get passed around and bring hope to others? Honestly, I don’t think there’s any good way to answer that question other than to say “countless”. And every time that story gets told it brings hope to yet another thirsty soul. It brings with it the potential of new life and fruit; fruitfulness that would not be possible without the pollinated seed of that story filled with hope and courage and most importantly God’s perfect provision in His perfect timing. Amazing.

Then, just when I thought this sunflower’s story had all been told, he slipped in the twist at the end that really threw me for a loop. I stepped back to get a shot of a cute little cat’s tail bowing its head in the presence of such a majestic flower, 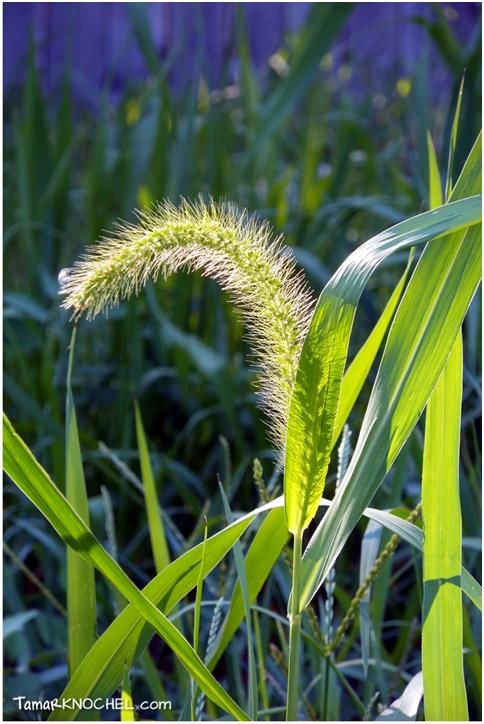 and when I turned around I was practically smacked in the face with a beauty I was not expecting. 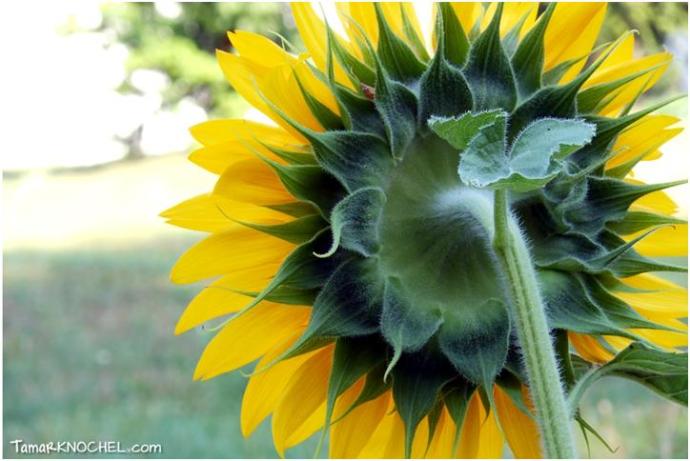 Of all the pictures of all the flowers that I’ve taken over the years, none have struck me like this one has. The beauty of a back, a past, a story a fairy tale ending; where the High King rides in on His white horse wearing His white robe and with a single word saves the day. Has that ever happened to you? When just one word is all it has taken to make everything line up in just the right way; to make everything that was tumbling around in your life simply fit together? The power of just one word is amazing. I’ve heard that it was only one word that God spoke to create all of this, “universe”. I don’t know if that’s true, I may never know until I get to heaven and see it for myself, but I can certainly see how it could be true. He IS God after all right?

This blessed sunflower’s story all told I turned my feet towards home only to have them drawn once more to a neighbor’s yard; this one filled with wildflowers. 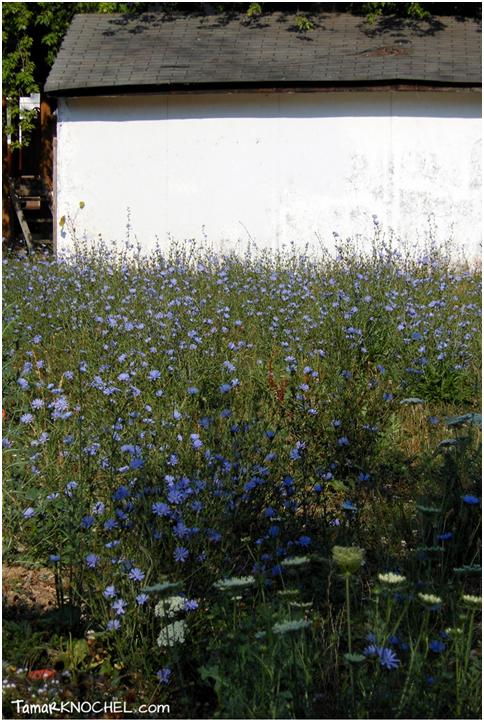 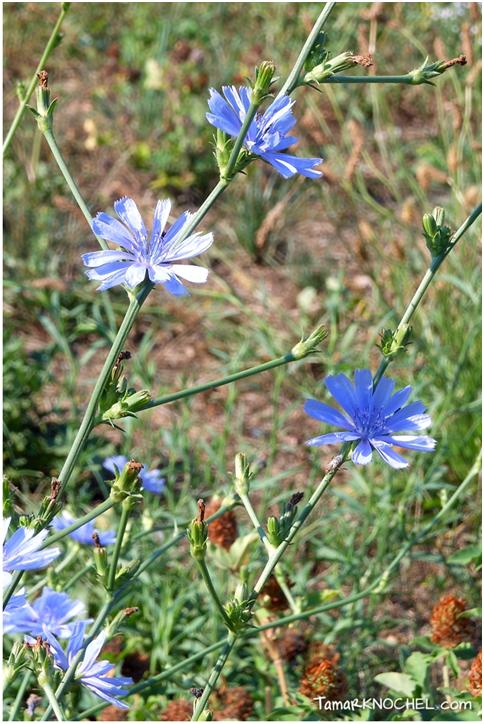 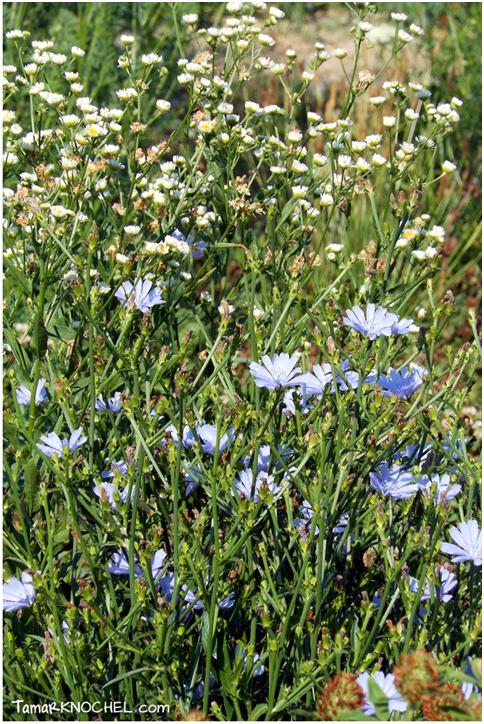 Standing in the middle of this little field of forget-me-not blue, snapping away as fast as my little point and shoot could keep up I slowly became aware of a great buzzing about me which momentarily drew my eyes away from my camera screen to look about myself. While I was over with the sunflower standing there alone there was only the occasional bee here and there. But here, amongst these many flowers there were many bees; and not that many small ones either. They were all large bumble bees. 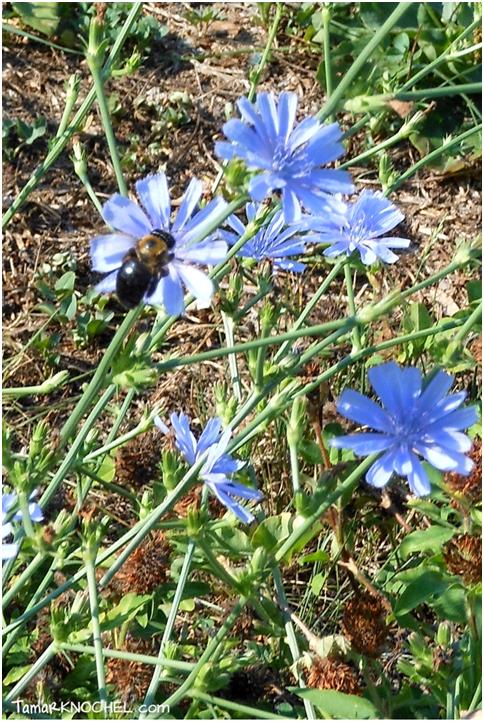 As these bees buzzed about, you could tell that they meant buzz-ness! While the smaller bees had landed gently on the sunflower’s face, these bumbles were barely stopping for the drink! I was amazed at their speed and agility compared to their size. Not to mention their sound. With so many of them surrounding me the sound was quite impressing. As I stood there watching them and attempting with all my might to get my camera to focus on them faster so that I could shoot them it was as if I could hear the voice of God in the humming of the bees, busy about their work. “You can fly too…”

Look at the bumble bee’s wings: 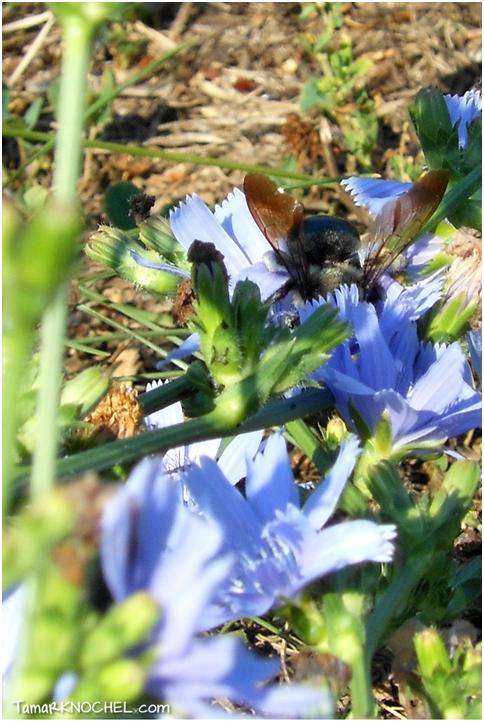 Though this picture doesn’t do them justice, when photographed well you can see how much smaller the bee’s wings are compared to its rotund body. Scientists have studied them and have concluded that aeronautically speaking they shouldn’t even be able to fly! But no one told them that they couldn’t, so they do, and quite well I might add.

This morning when I woke up the Holy Spirit was singing a line from one of my daughter’s many Barbie movies, “if I wasn’t meant to fly, I wouldn’t have these wings…” 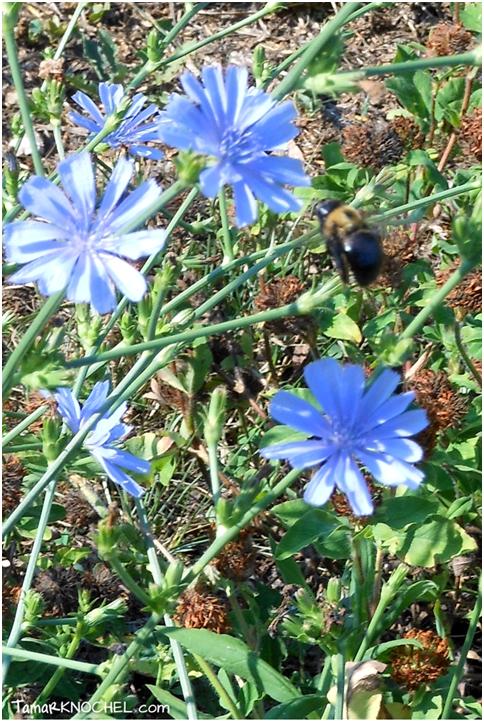 There are many birds that have wings but do not fly up in the sky. They may flap them from time to time to get from here to there, but somewhere along the line of time someone told them that they couldn’t fly, and after a while they believed it enough that they just stopped trying.

This afternoon in a conversation with my Beloved Aunt Cynthia God reminded me of another animal story. The circus elephant. When these elephants are babies the trainer will put the ankle cuff on the elephant and attach it to the chain and a large stake driven into the ground. The elephant is small and isn’t able to break free from the chain that is holding it back from roaming free. As the elephant grows the ankle cuffs get larger with it, but the chain and the stake stay the same. When the elephant is full grown it could easily remove the now tiny stake from the ground and be free… but it never tries because the chains around its feet are no longer holding it captive. It’s the chains in its head that keep it where the trainer wants it to be.

Where are your chains today? Are they on your ankles, or in your head?

Has Satan lied to you long enough that you’ve finally been trained to stop trying to fly, trying to break free from his prison of pain and fear and doubt? My friend, believe and break free! Believe the voice of truth that has been buzzing around you, the voice that has whispered to you in the wind, in your sleep, in your friends, “You can fly too!” Together we CAN do this! Together with the love of God we can fly, soar on wings like eagles, run and not grow faint, walk and not grow weary. With God, ALL things are possible, and if God is for us then who can be against us? If you’re told often enough that you can’t, after a while you believe it… well if that’s true then wouldn’t the exact opposite be true too! I’m telling you today that you CAN! Believe it!

My friend, creation speaks, all around us the heavens pour forth speech, what are they saying to you?