I am the LORD

Sunday morning rolled around fresh and new and filled with hope for a “successful” day. God had woken me up dark early to start my day with a good washing in His word before returning to bed to meditate and perhaps dream about it until the rest of the family awoke. By the time I was back up and dressed that morning my husband already had the Bible table up and going! I emerged from the bathroom fresh-faced and ready to start breakfast when he came rushing in the door “One of the trash boys just took a Bible!” Before breakfast even! Hallelujah Lord! Thank You so much!!!

I handed him some bacon, sausages and a pan to take outside to start working on breakfast over the fire while I mixed up pancake batter. Cooking over the fire is one of our FAVORITE things about camping. No more than twenty minutes passed before Sean was rushing in again,

“Another one of the trash collectors took a Bible!”

I said, “You mean the same one took another Bible?”

“No, a different one! That’s two Bibles already this morning!”

So we finished cooking and eating our breakfast, which ended up being more like a brunch, cleaned up the mess and got Sean all ready to head off to the derby to help his friends with their cars. He was there to work after all! The kids and I stayed at the camper until the first derby started; I had promised them a fishing trip after the races were off for the day. But for some reason the Spirit held me back after the engines started roaring. I just didn’t feel released to go and leave the table yet. In spite of the hounding of yesterday afternoon when He kept telling me “a watched pot never boils” and then proving it with two Bibles being accepted as soon as I left the table. So I thought it was curious that He would have me stay at the table after the crowd had passed into the grand stands for the final day of the biggest Demolition Derby event of the year in America. It wasn’t long though before I learned WHY He was holding me in my seat and telling anxiously waiting fishing-gear clad children 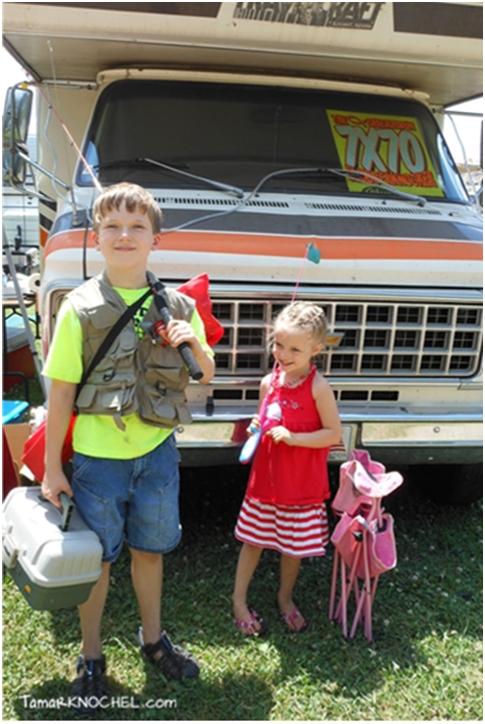 “We’ll go fishing in just a few more minutes, it’s not time to go quite yet” and then watching their faces sink yet again as I continued to hold them off. There were two ladies, one driving a four-wheeler and the other was getting into the green golf-cart that she had parked and left across our paved path all night. When she went to start the poor thing it wouldn’t move. I heard the woman on the four-wheeler say “we can go find someone to help”. I looked over at them and said “is there anything I can do to help?”

“Do you have a jumper-box?” said the four-wheeled lady.

“A jumper-box, something to hook up to the battery to charge it and start it.”

I ran around to the rear of our site where our trailer full of car stuff was parked and pulled back the blue tarp to find the battery charger that got packed with Sean’s comment “I don’t think we’ll need this, but I’ll bring it just in case.” Well, it’s “just in case” had come along! Sean had unconsciously followed the Holy Spirit’s leading and he had packed something he didn’t think he would need over the weekend. And he was right, HE didn’t need it, but these ladies sure did! The two ladies pushed the green golf-cart over next to Rover and we plugged in the charger and tried to start up the cart. It didn’t work, but we had tried. So the ladies both got onto the four-wheeler and left the cart to charge in the hopes that it would start up later. I felt so GREAT! Not only had God provided for their need through us, but He had USED me to help someone! I was thrilled!!!

I walked back around to the front of Rover and announced “OK kids, let’s go fishing!” and was greeted with an exuberant “WOOOOHOOOOO!!!!!” from both of them. We packed up our chairs and some books and headed to our “secret” fishing spot we had found the afternoon before (after I got over my temper tantrum) and set up by the edge of the river for the day.

The LORD is my shepherd… He leads me beside still waters

At the end of the day of derbying – we could tell it was the end because the roar of engines ceased – we headed back to Rover for dinner. I had the kids sit on a log in the open site across from Rover to take a picture of them.

Just as I turned back around to cross the street, I saw it. A big burly tough guy was walking past the table. He didn’t slow down, he didn’t turn around to look and see if anyone was looking, he just stared straight ahead, reached out with his left hand and grabbed a Bible on his way past the table! My Spirit man did a little jig of joy inside my heart while I did my best not to make a sound and scare him or betray the fact that I had seen what he had just done. God is so gracious that He allowed me to see that fifth Bible taken and the manner in which it was received. By that man reaching out to grasp that free and priceless book He was accepting the Word of God – Jesus – into his life and into his heart. Although his mouth uttered no sound, his hands told the story in bright and loud living color. Just like all the rest of us we are hesitant to admit that we need a savior that we need help, yet inside we know we do.

Categories: Ezekiel, Writing Through the Bible in a Year | Leave a comment