In the Midst of the Storm of My Poor Choices – Grace

As I was walking back in the door this morning after ushering each and every other member of my family out of it I noticed that Sean had left his glasses behind. Knowing that he gets headaches without them I decided I was going to take them to him at work. I went to get my phone off the charger and saw that my notifications bar was FULL! I went to start clearing things off of it and wouldn’t you know half an hour later I was still sitting there on the bed clearing away notifications when I got a text from Sean mentioning that he had forgotten his glasses.
I told him that I was “just” getting ready to bring them to him. 😉
Now, if I had really thought things through I would have heeded the two text messages that the weather channel had sent me warning me about a thunderstorm headed our way. But oh no!
So I jumped into the car and headed to Reynolds to deliver my Beloved’s glasses. As I was pulling out of town it was starting to sprinkle. As I was almost to Reynolds it looked like this (yes, I just HAD to pull over even in my rush to take a picture.)

As I pulled into the parking lot the Emergency Broadcast System interrupted the KLOVE morning DJs’ joking about spilling the Sentsy warmer all over the counter and that’s when I knew that if I wanted to make it home I’d better BOOK IT! Or stay, but what would I do while I sat it out? I decided to try and book it. Yet another not-so-wise-decision of the day. By the time I reached that same tree headed the other direction it looked like this (yes, I just HAD to pull over even in my rush to take a picture – leave me alone.) 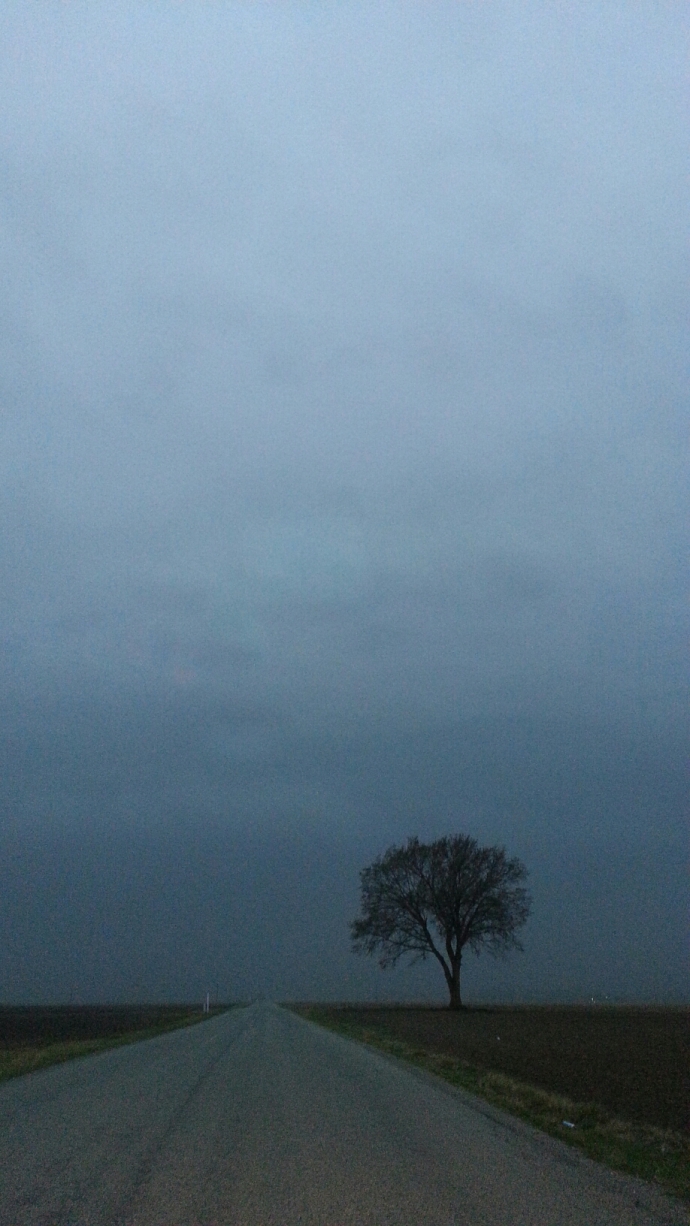 I was beginning to get the feeling that I might not be able to beat this storm home.
I was a couple of miles past the tree and SEVERAL miles from home when the deluge hit and every drop of water that those clouds had been storing up came falling out at the same exact moment… and for about 15 minutes after that too!

The sky was black, the wind was howling and pushing my car around and the sound of the hail was nearly deafening. Thankfully it was NOT quarter-sized like the EBS had foretold. And yet right there in the midst of the storm that my poor choices had brought me to, I had peace and no fear what-so-ever. You know why? Because I knew God was with me, even in the midst of the storm of my own bad choices. He didn’t leave me, He didn’t ignore me or even give me the cold shoulder. Actually, His presence was more vivid and obvious in the midst of that storm than it had been either before or after. The truth be told, He actually sang to me right there in the midst of the storm and told me that I wasn’t alone and that He loves me. Even when I make poor choices.
As I sat there on the side of the road watching the rain drops literally swirl in torrents through the newly greening grass like ocean currents through seaweed I shook my head in amazement. His creation is so amazingly wonderfull! His creation is absolutely beautiful in it’s fury and strength. It makes my head spin in awe thinking, “If a simple storm is this powerful, how much more powerful is my God whom I call Abba, Father, fortress!?! HIS faithfulness is my shield!
Simply amazing!

Categories: 365 Life, Psalms, Season 3, Writing Through the Bible in a Year | Leave a comment