God’s Not Mad at You

Because of the LORD’S faithful love we do not perish, for His mercies never end. They are new every morning; great is Your faithfulness! I say: The LORD is my portion, therefore I will put my hope in Him. Lamentations 3:22-24

Once upon a time, I resolved to read through the Bible in a year alphabetically (starting in Acts and reading through to Zephaniah.) After a year and a half I was only halfway through the Bible! I was tired and frustrated and ready to give up on the whole endeavor until I re-watched an old video of my husband trying to run up a huge quarter-pipe 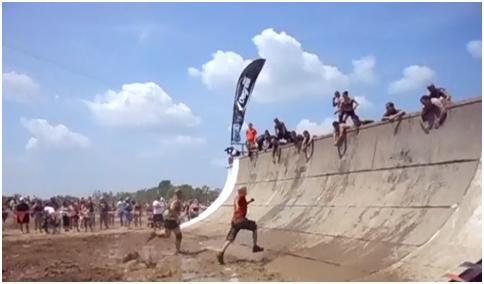 at the end of a 13 mile long Tough Mudder Race (think ½ marathon with obstacles along the way). He ran at that impossible curve (aptly named “Everest“) with all his might and barely even reached the middle before sliding back down to the muddy bottom. But he didn’t stay there. He got back up, got back in line and gathered his strength to try again. His second attempt at the obstacle brought him closer to the top; but it still wasn’t close enough. Some might have considered that a failure and simply walked around the obstacle altogether; giving up. Not my husband. He had been preparing his mind and body for this very obstacle for months and he wasn’t about to let it beat him. It was the end of a VERY long and difficult race. He was exhausted. But he had something at this point that he hadn’t had for any of the rest of the race, his family watching and cheering him on. He stood there facing his foe, this obstacle that had sent him sliding into the mud twice now, and he gathered his strength and his courage to try again, and this time when he ran he made it high enough that with outstretched hands he grasped the hands of someone, a stranger, who had reached out their hand from the top to help him get over this nearly impossible obstacle.

Life is filled with challenges my friend. We can sit and moan about them having beaten us, or we can gather our strength and our courage and decide that we’re not going to allow a nearly-impossible obstacle to become an impossible one in our heads. Humanly speaking it’s impossible for a virgin girl to become pregnant and have a baby. Yet when Mary the mother of Jesus was faced with this very proclamation and she asked the angel, “how can this be?” The angel Gabriel said with a shake of his haloed head, “Nothing is impossible with GOD.” (Luke 1:37) The moment God enters into the equation the impossible becomes nearly-impossible. In Mark 10:27 Jesus says, “With men it is impossible, but not with God, because all things are possible with God.”

My friend, I don’t care what you’re facing today, a dropped resolution to lose weight or an impossible marriage – don’t give up!

Galatians 6:9 says, “Let us not become weary in doing good, for at the proper time we will reap a harvest if we do not give up.” (Emphasis mine) You CAN do all things through Christ who gives you strength. (Philippians 4:13) You may feel exhausted and worn out from this rat race through the Valley of the Shadow of Death, but always keep in mind the truth of life. It’s all a test. BUT no one ever said it had to be a closed book test, or that you have to take it alone! God’s not mad at you for failing; He’s pleased with you for trying! He KNOWS what you’re going through. He understands and He’s here to help you! Let Him! The addition of Jesus into the equation turns the impossible, possible! Get up and try again my friend! You CAN do all things through Jesus who gives you strength!

Categories: Writing Through the Bible in a Year | 2 Comments