“The LORD, the God of their ancestors, repeatedly sent His prophets to warn them, for He had compassion on His people and His temple. But the people mocked these messengers of God and despised their words. They scoffed at the prophets until the LORD’s anger could no longer be retrained and nothing could be done.

So the LORD brought the king of Babylon against them. … God handed all of them over to Nebuchadnezzar. The king took home to Babylon all the articles, large and small, used in the Temple of God, and the treasures from both the LORD’s temple and from the palace of the king and his officials. … The few who survived were taken as exiles to Babylon, and they became servants to the king and his sons until the kingdom of Persia came to power.” 2 Chronicles 36:15-18, 20

“During the third year of King Jehoiakim’s reign in Judah, King Nebuchadnezzar of Babylon came to Jerusalem and besieged it. The LORD gave him victory over King Jehoiakim of Judah and permitted him to take some of the sacred objects from the Temple of God.” Daniel 1:1-2

I probably said this last year on this day, but God is so awesome!!! I mean seriously. We’re reading through the Bible alphabetically and yet we still end up reading chronologically when we read from 1 Chronicles to 2 Chronicles to Daniel!!! Honestly, isn’t that just cool??? To my knowledge, and I haven’t check recently, I am the only one publicly reading through the Bible in a year alphabetically. I’m sure there are others doing it, but the last time I looked I couldn’t find them online. I’m just so honored that God chose me to do this! And I’m so grateful that He used my friend Kelly to introduce me to the idea! I love you Kelly!!!

Today’s Word of the Day was all about transition. It was a transition from one book of the Bible to another, in that transition was the Israelite’s transition from a time of rebellion into a time of captivity in order to use that captivity to guide them back into a humbled position with their God. And I love how God works, because my reading in Beth Moore’s So Long, Insecurity You’ve Been a Bad Friend to Us went along those same lines. This week’s reading was about Beth polling her blog audience for stories on how insecurity has made a fool of them. She shares MANY stories that are great examples, many of which I could have written myself – sadly. And of course, God also has all this timed so that I’m dealing with all this in my own life at the moment so that I can even further relate to what they’re saying.

The more time I spend in these two books the more I’m recognizing insecurities in myself and I hate them. Hate isn’t a word that I throw out there often, but in this case I think it fits. I hate the way insecurity makes me feel. I hate the way that it makes me act. I DEFINITELY hate the way that it talks to me and tries to get me to believe its boldfaced lies! Insecurity has tied me up in knots with no bows. It has no laces hanging free to simply pull and unloose the work it’s done. It has grown and wrapped it’s tentacle-like roots tightly around my feet and kept me from walking freely and easily through my life. (Not that my life would have been easy without the insecurity, but it certainly would have been easier.) I’m fairly certain that insecurity caused me to make choices that set me on a path that wasn’t good for me – at all. I remember my Freshman year in High School the pressure I felt to have a boyfriend and to get physical. And the saddest part was, the pressure wasn’t from the other kids, it was from my insecurity!!!!! I was so insecure in myself and who I was that I felt like I needed to be like everyone else, do what everyone else was doing. And “everyone” else was getting physical with their significant other (this is of course the biggest lie of the century, but I believed it hook, line and sinker at the time). I never stopped to realize that honoring my personal worth should be more important to me than bowing to the status quo. 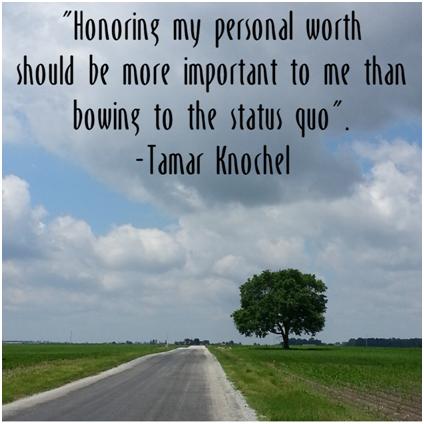 This week I’ve been in awe of my husband’s ability to voice his mind with very little concern to what other people will have to say about his opinions. He throws stuff out there on Facebook and really doesn’t get his feathers ruffled when people say things back to him. Me on the other hand, I can only be on Facebook for a few minutes before I take people’s status updates so personally that my heart starts to race and my hands start to sweat. One night I actually made myself physically ill because I was so distraught about what people were saying on Facebook – none of which was actually to me, or about me, just about things going on in the world that I don’t agree with. The thought of truly speaking my mind in such a public format terrifies me to pieces! What will they say? Facebook is vicious and people can be so mean without realizing it. What will they think of me? Will they still like me? To which Insecurity pipes up: “Of course they won’t, you have a different opinion than they do, they’ll hate you for it – duh!”

God has called me to public speaking and publicly voicing His words. Words that vastly contradict what the mainstream is saying. And insecurity has me immobilized. I’m paralyzed with the fear of the rejection of the people I love AND the people I’ve never even met before. For as long as I can remember I’ve always been desperate for people to like me. At times to the point where I would become someone else in order for them to like me. Obviously this is ridiculous because then they don’t like ME they like the pretend me which totally defeats the point! Honestly, if I can’t be ME and have you like me, then we shouldn’t be friends! I don’t want to be such a passive people pleaser that I completely lose myself in the process. That shouldn’t be OK with me and it shouldn’t be Ok with you either. I mean, I don’t want to be friends with someone whose not being themselves, do you?

I think that’s where I’m so grateful for God putting my husband and I together. He is my perfect match. He’s everything that I’m not. And he’s not everything that I am. I admire him so much and his ability to not let the opinions of others phase him when it comes to be honest to himself. When I grow up, I want to be more like Sean. Honest and unafraid to share how I REALLY feel about something. I believe I will get there. But in the mean time I’m so glad that God has blessed me with a partner who loves me for who I really am. He’s seen me at my best and at my absolute worst and he has stuck with me through it all. I can’t ask for much more than that now can I? 😀