“You have heard; now see all this; and will you not declare it? From this time forth I announce to you new things, hidden things that you have not known.” Isaiah 48:6

For the last four Tuesday night’s I have traveled twenty minutes south to a church I don’t attend where I have been taking a New Testament Greek class. I’m there for two hours that feel like twenty minutes! While I sit and listen to my brilliant teacher I can hardly wipe the silly grin off my face because I can hardly believe that I’m even there. Last night when we opened our Bibles to John chapter one to begin translating I looked down and saw a word that I actually recognized and could read!!!!! I was so excited I could hardly stand it! I was actually reading the original Greek text of the Bible and understanding what I was reading.

Last week when I walked out of class, high as a kite I said, “Lord, it’s so HARD! But it’s so GOOD!!!” I started the class a week after everyone else did, so I’ve been struggling to keep up with everything, but to me the struggle is totally worth it because in the end I’m going to KNOW GREEK!

In these last four weeks we’ve translated the first twelve verses of John chapter one. And in those twelve short verses I’ve learned so much more than I ever expected. English as a language is so devastatingly lacking when it comes to translating the original Greek. There is so much more there than what any translator would possibly be able to convey in English. And that’s why I picked the verse that I did today, because God has already told me so much about Himself. I’ve seen so much, enough that I can’t help but declare it. But this is just the beginning. He’s opening up a whole new realm of reality to me right now, Greek being one of them, where He is announcing NEW things. Things that have been hidden that no one has known before now. And I’m not the only one entering into this new realm. Many of you out there are facing the same circumstances. Many of us are standing on the threshold of something big; bigger than we ever could have imagined or dreamed of. Bigger than anything we ever could have asked or hoped for, and it’s just waiting for us to discover it.

In 1 Corinthians chapter two Paul tells us, “We impart a secret and hidden wisdom of God, which God decreed before the ages for our glory. None of the rulers of this age understood this, for if they had, they would not have crucified the Lord of glory. But, as it is written, ‘What no eye has seen, nor ear heard, nor the heart of man imagined, what God has prepared for those who love him’ these things God has revealed to us through the Spirit. For the Spirit searches everything, even the depths of God.” (verses 7-10)

Although this isn’t the Earth’s first trip around the sun, there are STILL things that have been hidden just waiting for us to discover them. Sure, it’s probably going to be hard and possibly quite time consuming, but it will be GOOD! We’re on the cusp of something no one else on earth has ever seen or experienced before, and while ultimately there will be an inevitable turmoil involved in the process; the turmoil will be worth it. In the end, we will have achieved something NEW! Heaven and Earth have not passed away and that tells me that God is still working out His plans for us here. They’re plans for our good and not our harm, plans for a hope and a future.

My friend, things may look desperate right now. They may look desolate and hopeless, but take heart because Jesus has overcome this world and so can you. 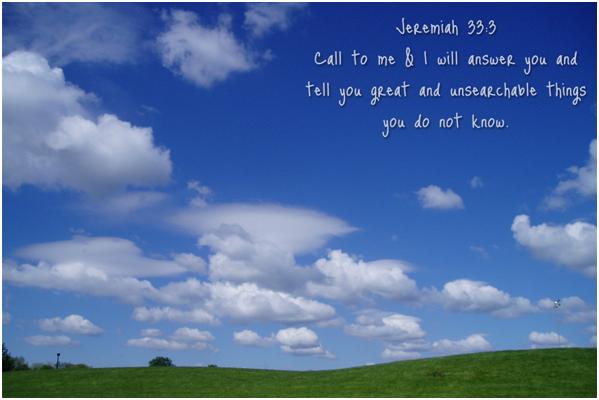 Categories: 365 Life, Isaiah, Jesus Loves YOU, Writing Through the Bible in a Year | Leave a comment