In today’s reading God shares His future plans with us, He tells us about the Spirit that He will put within us. 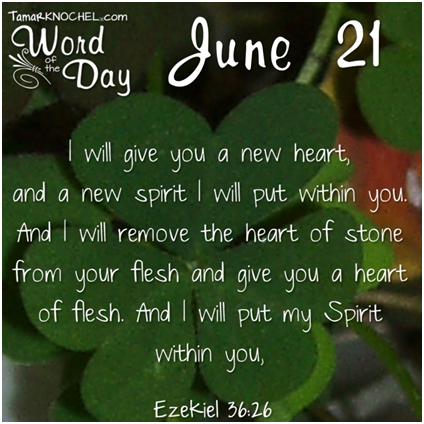 That word “heart” in Hebrew has the same definition as the Greek word translated “heart” that we discussed yesterday; it means the innermost being of a person. The phrase “heart of stone” is such a great visual isn’t it? This idea that our hearts can be hardened by the laws written on stone tablets and turned by the idea that our works have anything to do with our own success or failure in life.
For the last several weeks I have been chasing-the-wind-busy. So busy, that I have routinely neglected my private time with God. And while He has most definitely spoken to me through signs and wonders in this world around me, I haven’t taken any time to be still and really process those things that He has been telling me. I haven’t just taken a day where I could sit and type and think and rejoice about what He has done for us all. I’ve been “too busy” to spend intimate time with the One who loves me the most.

In John chapter six verse twenty-two through forty we encounter a crowd of people who have followed Jesus to the other side of the sea to Capernaum. The day before, they had seen Him performing signs of healing the sick and feeding the five thousand of them from a little boy’s lunch of five barley loaves and two fish and He had twelve baskets full of left-overs. So on this day, as the crowd is again approaching Jesus He says to them “Truly, truly, I say to you, you are seeking Me, not because you saw signs, but because you ate your fill of the loaves.” Here I have to stop and point out why they were really seeking Him in this moment. They were not seeking Him to be His friend, they were not seeking Him to even help or heal them, they were seeking Him because they had seen Him multiply the food. Their wives labor hours every day to make bread because it is their staple food. The bread that only lasts a few days before it goes stale and is no longer any good to eat and can be fed to the birds. They pay a pretty penny to buy their food and here’s this guy that can make it multiply right before their eyes. In the response Jesus gives them you can tell that He knows, they aren’t seeking Him out for Him; they are seeking Him out for what He can give them, what He can do for them. They’re seeking Him so that they can have their bellies filled a second day in a row with a bread that doesn’t last. They are seeking Him to fulfill their desire for material things from this world. So Jesus explains to them:

Oh, how many times I have been caught in this very catch twenty-two! Where I am laboring for something that simply won’t last past today; worrying hard about the circumstance that will only last momentarily and then pass by me like the wind and be gone. What is this food that endures that Jesus speaks of and where can we get some???

Guess what the word “endures” means in Greek? ABIDE! Yup, you guessed it! But wait, there’s more!!! That word in Greek, Meno, is the very same word that Jesus uses over and over again when He is standing in the vineyard (John 15) giving His disciples an object lesson on how life in the kingdom works and He tells them “I am the vine; you are the branches. Whoever ABIDES (meno) in Me and I in him, he it is that bears much fruit, for apart from me you can do nothing…. ABIDE (meno) in My love.”

Oh how great is the love of Jesus; great enough to BE the food that endures. THIS is true love; not how much we love God; that honestly doesn’t really get us very far. Look at the “super apostle” Peter. At the last supper he proclaimed his own dying devotion to Jesus, swearing that he would NEVER deny knowing Jesus and yet only mere hours later there he was three times in a row, within Jesus’ earshot no less, telling people emphatically and with curses that he did not know “that man”. No, our love for God doesn’t get us very far. Not that our love or efforts for Him are worthless; certainly not! It’s just not what we should be counting on, or abiding in, in this world or in the next. No. It’s GOD’S love for US that we can count on EVERY time. While we fail continually, He never fails. His faithfulness is unending and His love endures forever! As much as we love God, He will ALWAYS love us more. And it’s that love that we are called to abide in, to live in, to surround ourselves with and feed on. It is HIS unending perfect love for us that casts out our fears and drives away our sins from remembrance. As far as the east is from the west; that is how far His love stretches for us. While you can go north a far distance eventually you will end up heading south once more. No matter how far east you go, or west, you will never end up going the other direction. The east never touches the west; it is unending, just like God’s love for us… His love for YOU.

No matter what you’ve done, no matter what you’ve said, no. matter. what. God’s love can stretch father than your sin. He has cast that sin as far as the east is from the west because that is how much He loves you… and then some! He has forgiven you, now you need to receive that forgiveness and forgive yourself in the process. His Spirit abides in you, like an unborn child abides within its mother’s womb. And yet, supernaturally, we too are that child in HIS womb, His heart, His innermost being, His Spirit. His love is perfected IN us. His love isn’t perfect without you, because it’s missing a key element, you! 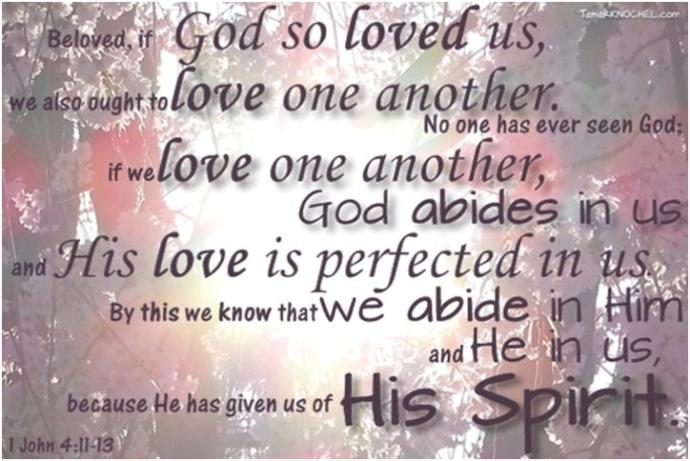 A few days ago I had a dream about a little baby girl named Rose. She was about six months old and all rolly-polly chubby with the bluest blue eyes you’ve ever seen. She was in my bedroom with me because we had taken her into our family and I was taking care of her. I was worried though because I didn’t have any diapers or food for her. But when I picked her up and she snuggled her precious little bald baby head into the crook of my neck I realized that she didn’t need any diapers or food, she just needed me to love her and that was enough. Then I woke up. For the last few days I have been seeking God’s interpretation of this dream asking, “Lord, who is Rose?” Today, through spending the entire day in prayer through writing and searching the well of His word for my Lifewater, He shared with me the interpretation and told me who Rose is. Rose is the child birthed from my marriage to Christ; she is the precious infant that needs no worldly food or possessions. Rose is just that, a flower in the garden of relationship to the One who loves us the most. She is the creation born from a love affair that will last for all of eternity. She is the combination of His Holy Spirit and my flesh abiding together in a perfected unity that can only exist within that secret garden where I meet intimately with my heavenly husband. I need not worry about providing for this little one, because all she needs is me. All she needs is for me to love her and hold her close to my bosom where she can hear my heart beat and know that beats for her Father. She is me. She is Him. She is Rose.