For behold, He who forms the mountains and creates the wind, and declares to man what is His thought who makes the morning darkness and treads on the heights of the earth – the LORD, the God of hosts, is His name! Amos 4:13

Well, as you can imagine, after eating funeral comfort food for four days I‘ve gained a pound or ten over the long weekend our family had. I just keep looking at myself sideways in the mirror and wondering how in the world it could be possible to look like this again. Until finally last night while judging myself in the mirror God asks me, “Who made you?“

“And did I make a mistake?“

“No Lord, You don‘t make mistakes, You make miracles.“

“So do you think that maybe this is how I want you to look right now?“

“Apparently! But maybe I don‘t want to look like this right now!“

“You used to be happy to look like this, you were comfortable in your skin just the way it was.“

Smiling, “Yeah, I was. And my husband liked how ‘soft‘ I was.“ (Meaning not boney) “But then I lost thirty pounds, I really liked being skinny Lord.“

All my life, since Kindergarten at least, I have wanted to be a teacher. I‘ve never wanted to be anything else; I‘ve never wanted to do anything else, teaching is just in me. It‘s part of who I am, it always has been, and it probably always will be. During my time in college, I learned something about myself, I was much less excited about teaching the kids about math facts and much more excited about teaching them test taking skills and other life techniques that would last with them throughout their entire lives. After I graduated and we moved back to our hometown I wasn‘t able to get a job at the Elementary school because A) I was in the hospital having our first child on the day my interview was scheduled and B) by the time I got out all the positions had been filled for the year. It looked like at least for the first school year God had other plans for me. And low and behold, He did! I started working as a daycare teacher in a newly opened daycare. I absolutely fell in love with the kids and I began to ponder if maybe I had perhaps missed my true calling as a pre-school teacher rather than an elementary school teacher. When I got my very first classroom I lit up! My parents actually said that I glowed when I was teaching those little ones. I was teaching them life skills that they would use for the rest of their lives, I had found my calling! At least for that season anyway.

Then God called me back into the dugout for a time to kind of reboot a bit. I became a stay-at-home mom who babysat for a while. During that time I learned more about having an actual relationship with God and spent a lot more time studying His word and getting to know Him more. And that‘s when He started drawing the gift of writing out of me. I had always had it; just, I had never really used it. The call to write was absolutely insatiable, and still is! I‘ve gone three days without writing and I feel like I‘m about ready to explode with all the words that God has bottled up in me ready to burst out onto this page! Through the last few years of being a stay-home-mom/nap-time writer God has helped me define the next phase of my life. For a season He called me to teach children how to function in this crazy world of cups without lids and forks with sharp tips, how to blow their own noses and wipe their own bottoms. But that season is quickly drawing to an end as my youngest is entering her first year of Kindergarten this fall. *Sad forlorn siiiiigh…* And with that transition He has been preparing me to enter a new phase of teaching. A phase where, I will be teaching His children how to function in this crazy world of darkness without light and words with sharp meanings, how to blow their own horns and wipe their own tears. Life is hard, no matter what age you are, no matter what stage you‘re in, no matter what season it is. But a life without Christ is harder and darker than I can even imagine! And I believe that it‘s about to get even darker.

We each have been called to be the light in the darkness, to be like The Light so that the darkness cannot dwell with us. We each have been called to be who God created us to be. When I was in Kindergarten and dreaming of someday becoming a teacher I have to admit that it NEVER entered my mind that I would someday teach adults. Not once. And yet, that‘s what God had planned for me all along, I truly believe that. Because when I look back on my life and everything that has happened to me, I can see God‘s hand grooming me to become the very thing He is now telling me that He created me to be. It‘s absolutely amazing!

Just last night I sat on our back porch step with my husband and shared with him my views of my calling as a teacher through writing. How it‘s just something inside me that I can‘t deny. I can‘t push it aside. And I can‘t help but think about it all the time. It‘s simply the way that God created me and I can‘t deny that. God is the one that created my “inmost being“ by “knitting me together in my mother‘s womb“. My friend, we have been “fearfully and wonderfully made“ by the One who‘s “works are wonderful“. (Psalm 139:13-14) HE is the one who created each and every intricate part of our bodies and our personalities so that we would fit perfectly into His plan for who He has called us each to be… ourselves. He has called us to be who He made us to be, nothing more, and nothing less.

Only you can do,

And you are alive

In the great orchestra

You have an instrument

– Max Lucado (from the front of my birthday card last year that I just found last night while cleaning! Thank You Lord! It‘s as if You knew…)

The gifts that God has given you are His light placed within you for the purpose of shining brightly in this very dark world. Those gifts are uniquely yours in the way that you use them as only YOU can. Other people may have the gift to teach like I do, but they won‘t ever be able to teach exactly like I do, because they‘re not me. Others may have gone through many of the same life struggles that I have gone through, but their stories are uniquely their own, just like mine is uniquely mine. We each have a song to sing in this “orchestra“ called life, but although we may each be singing the same song, our individual voices are what make the song special. Sure multitudes of people have sang “Somewhere over the Rainbow“ over the years, but no one has sang it just like Judy Garland, that‘s her song, and we all know it. We each have our songs to sing, it‘s just making the choice to sing them. 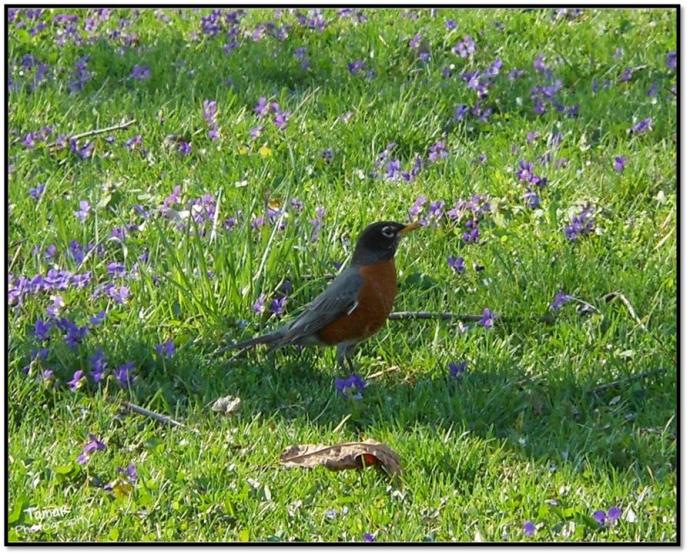 One of the things that I‘ve noticed in these early morning hours with God alone in my rocking chair is the song the birds sing. They are up and singing long before the sun hits the horizon. They are up singing God‘s praises while the darkness of night is still heavy and permeating… but they don‘t seem to care. They simply sing on, as though the sun were already up. They know it‘s coming, even though none of us can see it yet, in their bones they feel it approaching the edge of the horizon and so they sing. In the fall, they feel the winter approaching and though they can not see it they follow the stirrings in their breast that God placed there through instinct to guide them South where there will be plentiful food and hospitable conditions for them. They leave trusting that God will provide for them when they get to where they are going. And upon arrival they are met with the fruit of their faith, warmer temperatures and food to fill their bellies. God calls the birds South in the winter, and then He gives them the wings with which to get there and the stirrings in their breasts to guide them along their journey.

If God is willing and able to provide for the birds of the air; how much more is He willing and able to do much more for us? God has placed the stirrings of a calling within each of our breasts. He has called each of us out of our comfort zone in order to guide us to where the conditions are much more hospitable for us to live in, but we have to launch ourselves from the safety of our nests, raise our wings and fly in order to get there. When God called Abram to follow Him to the Promised Land Abram never would‘ve gotten there if he hadn‘t packed up and moved out. Sometimes we just have to follow the light in our hearts in order to get to where God is guiding us. It‘s like the children‘s song says:

“This little light of mine, I‘ve gotta let shine. (x3)

Shine it all over this dark world, I‘m gonna let it shine (x3) 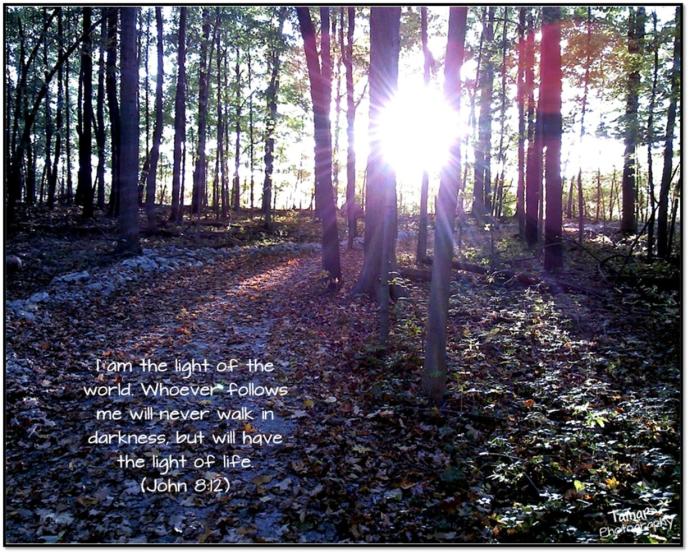 Jesus is the light of this world; the faces of those who look upon Him reflect HIS radiance and shine brightly in this dark world for Him. You reflect His light through your dark circumstances. Don‘t hide that light, His light, under a bushel and don‘t let Satan blow it out! Hold it high so that it not only lights your own face, but all the faces of those around you! It may be the only light some people will ever see. 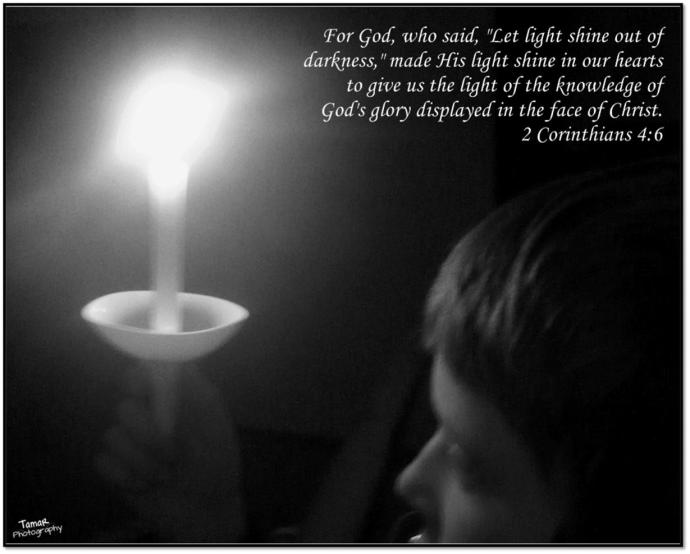 God made you to be YOU, embrace that, be joyful about that and use that. God placed the light of His talents within you so that you would use them for His glory. So use them and shine that little light brightly for Him today… no matter what your circumstances are! Because after all, we serve the God who made the Pleiades and Orion, and turns deep darkness into the morning! (Amos 5:8)

Shine by the David Crowder Band

Categories: Amos, Writing Through the Bible in a Year