A House Safe from FEAR 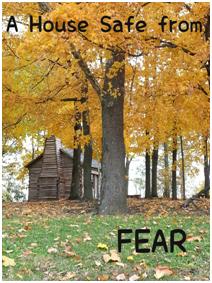 My friends, can you image a place like that? A place that is set so far above Fear that it literally can not be touched. A house that is so set apart that it is unaffected by Fear and all of his counterparts. It makes me think of the 23rd Psalm,

“The LORD is my shepherd; I shall not want. He makes me lie down in green pastures. He leads me beside still waters. He restores my soul. He leads me in paths of righteousness for His name’s sake.

Even though I walk through the valley of the shadow of death, I will fear no evil, for you are with me; your rod and your staff, they comfort me.

You prepare a table before me in the presence of my enemies; you anoint my head with oil; my cup overflows. Surely goodness and mercy shall follow me all the days of my life, and I shall dwell in the house of the LORD forever.”

A while back I was watching a show with my kids about sheep. It was a show where the kids in the show got to be shepherds for a day and spent the show learning things about the sheep. One of the things that the shepherd said to them, I doubt I will ever forget. He handed one of the kids a shepherd’s crook and then immediately followed it with, “Do NOT hit the sheep. We never use the crook to hit the sheep. We use it to point them in the direction we want them to go.” Then he called to his sheep dogs and told the child to point the crook toward the shed where they were trying to herd the sheep. And the sheep went toward the shed. They had heard their shepherd’s call and they had seen his rod pointing in the direction he wanted them to go (which conveniently was away from the dogs that were chasing them).

In today’s Word of the Day, the scripture I pulled out is something that Job was saying about people who don’t follow God. He was commenting on how, it seemed to him, that even though they didn’t follow God their house was safe from fear even though God’s rod of direction wasn’t on them. So often we can look at others outside the faith and see their wealth and possessions. We can see their seemingly absence of trouble in life and think that they’ve got it made. But we have to remember that there are always things that we simply can not see. We can’t see inside their hearts, but God can; and does. We may be able to look at those people and think, “He’s not afraid of anything”. But the truth may be that he’s actually afraid of everything.

This doesn’t have to be the case for those who see God as their Shepherd in life. His rod and His staff can comfort us.

In addition to using the Shepherd’s crook as a way to direct the sheep, the crook is also used to defend and safe the sheep. It was often used to ward off wild animals who had come to attack the sheep. As well as using the crook itself for keeping the sheep in line and away from danger altogether. The shepherd could use the crook to hook a sheep that had fallen into a pit and lift him out.

Our Good Shepherd uses His rod and staff to comfort us, to lift us up from the pit of doubt and fear. He uses it to direct our steps and deliver us from evil. He uses it to lead us in paths of righteousness for His name’s sake. He is Jesus, the house of the LORD that is safe from FEAR. And you can dwell in Him all the days of your life.

Categories: 365 Life, Jesus Loves YOU, Job, Writing Through the Bible in a Year | Leave a comment