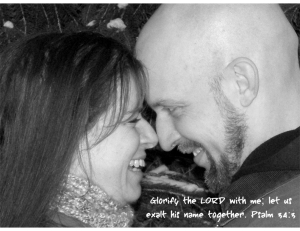 Once upon a time, in a high school far far away from here there lived a cute, short, curly-haired Freshman girl who had a friend named Carey. At this same school, with the same friend there was a Senior football player. He was handsome and funny and was extremely muscular. On the first day of school, the girl was nervous at lunch time. “Who will be in my lunch group with me this year?” she wondered, “Who will I sit with?” As she emerged from the lunch line and into the bright lunchroom she immediately spotted her friend Carey, a senior on her dance squad. She rushed over to see if she could sit with her. “Of course!” Carey said, and the girl sat down relieved that there was at least one familiar face in her lunch group. Next, Carey’s other friend, the Senior football player came up and asked if he could sit with Carey too! Seeing as how there was plenty of room and he was her friend too they said “sure”.

Almost every day after that, lunch was spent with these three friends chatting over one thing or another, high school issues, those kinds of things. And the more the girl got to know the boy, the more the girl liked the boy. He was fun to be with, he liked a lot of the same things that she liked. But the best thing of all was how he made her laugh. He had such a strange sense of humor that she just adored about him. After several months of this, Carey and the girl were waiting in the lunch line when the boy walked up behind the girl and covered her eyes with his hands, “Guess who?” he said. Of course she guessed immediately, and he let go of her eyes and stepped into line next to the girls to wait for lunch. That afternoon Carey, their mutual friend, mentioned to each of them that they might make a cute couple. Hmmmmm…. But alas, at the time he was single and she wasn’t, maybe it wasn’t meant to be.

However, it wasn’t long before the girl broke up with the boy that she was seeing and took a bit more interest in the boy. He WAS handsome, very handsome now that she was looking a little closer. And wow! Look at those arms, he MUST lift weights, a lot! But, it was too late for her now too, he was asking another girl out by now. Siiiiiigh……

By this time Christmas was getting nearer and nearer and it was basketball season at the school. The girl was busy preparing for the halftime shows at the games and the boy was busy preparing for wrestling season (Oh, yeah, he wrestles too), and pursuing that other girl. So our girl started focusing less on the boy and more on her dancing, and a little on school too. The time came around for the dance squad gift exchange and the girls all filled out their short wish lists, placed them in a bag and then one by one drew them out to see who they had for the Secret Santa gift exchange. The girl, just as a joke put the boy’s name at the bottom of her wish list, because EVERYONE on the dance squad knew that she liked him and whoever got her list would think it was funny. Little did she know, but her friend Carey had gotten her list! The last few weeks of school went by quickly and the girl quickly forgot about her little “addition” to her list. The night of the last game of the year came around and there was a dance planned for after the game. All the girls from the squad were planning on going together, it was the last dance of the year before Christmas, they HAD to go! The game ended and the girl was in a small storage room next to the band room putting her things away when she looked up to see the boy changing his shirt. She nearly swooned at his rippling muscles! “Ahhhhh,” she sighed, “maybe someday”, as the boy then walked past her to the hallway on his way to somewhere else in the school.

Suddenly Carey came storming into the storage room with her coat. “Why does she have her coat?” the girl thought, “I thought she was staying for the dance.”

“I have another present for you!” Carey said with a giant grin.

“OK” the girl said suspiciously, one eyebrow cocked to the air. They had already done their gift exchange and she had said nothing of more gifts being in store for her, what was going on? Carey flung her coat over the girl’s head and led her in the direction that the boy had just gone. She wanted to say that she had no clue what was going on, but she did have one glimmering hope that it would be the one thing that she expected the least to get from a colorguard gift exchange. As Carey wrangled her into the hallway the rest of the girls in the squad chattered and giggled excitedly in a circle around her as she came to stop in front of two red wrestling shoes on the hallway floor. Carey asked her, “are you ready for your surprise?” “I guess so”, she replied, what DO you say in a moment like that? When Carey pulled the coat off her head the girl raised her eyes from the shoes on the floor to the jean wearing legs that were attached to them, to the familiar black shirt that she had just swooned over moments before, to the absolutely beaming face of that handsome Senior football player she’d had her heart set on for the last few months. The look on his face was PRICELESS to say the least, he was so proud of the fact that she had asked for him for Christmas and that he was able to deliver that gift himself. A trophy date for the dance to be sure! She nearly passed out as ALL the blood in her body seemed to flock instantly to her face! Boy, he sure was cute, and all hers for the night. After months of crossing paths, there they were, both single and staring at each other… with the entire dance squad standing around them watching! They all walked off toward the cafeteria where the dance was being held that night, the boy and the girl still in a bit of a daze as to what to do with themselves. The girl asked the boy, “I thought you liked Katie, what happened?” He said, “she told me ‘no’ because she knew that you liked me”. It looks like things might actually work out for these two.

The next Monday at lunch the girl found herself sitting alone for some reason, I don’t remember why. Until just a few minutes before the lunch bell rang. She was just getting ready to get up and take her tray to the kitchen when the boy came strolling through the lunchroom door headed right for her lonely table. He plopped himself down and said “I’ve got a question for ya”. “OK” she replied, “what’s up?” He tossed his huge class ring across the table at her and said “will you go out with me?” As she sat there watching the ring spin like a top in the middle of the round table, what else could she say but “YES!”? And right there, in that small town school lunch room she and he became “they”. “They’re a couple now”, “they’re dating now”, “they’re an item now”. And they were, and have been for the last SEVENTEEN years, today. I am that girl, my husband is that boy, and he still makes me swoon when he takes his shirt off! Our “they” has increased from just the two of us, to the four of us plus two cats and a tank full of fish. As for everything in between that day and this day? Well, most of that is for another day’s blog, but parts of it can also be found in our book True Intimacy, the story of how our love became cursed through the sin of pre-marital sex and then adultery. And how Jesus redeemed that love and broke the curse, and the details on how you too can have a truly intimate marriage! Jesus can help, He helped us, and He’s more than willing to help you too! Trust me, it’s TOTALLY worth it. I thought that we had lost that high school romance long ago, but we hadn’t lost it, we had just cursed it, pushed it back away from us with our sins. But with God’s help we learned how to change all that, how to get that lovey feeling back, only it was better this time. Because it had depth and meaning and healing in it. Yes, this time our love was rich and real and founded on what it should’ve been founded on it the beginning, JESUS and His grace. I am more desperately in love with my husband today than I ever was seventeen years ago, and this morning as I snuggled up to him in bed I told him just that, and then said “and just think, if I love you this much more now than I did then, how much MORE will I love you seventeen years from today???” And he squeezed me tight in his warm and still very muscular arms and said “I love you” in that way that always makes my heart melt for him.

God has blessed us with something that many couples never get, a second chance at love with the person they fell in love with in the beginning. Through what I can only account as the grace of God, we have stayed together through some really tough stuff, and I can’t even begin to tell you how grateful I am for it! The love that I feel for this man is so much deeper than anything I’ve ever felt for anyone in my entire life. And honestly, that’s only possible because of the forgiveness and TIME that we have invested into each other. Neither one of us was willing to give up on “us” when I was so very ready to give up on him. During those cursed years of our relationship, which in all honesty was the majority of those seventeen years, we stuck together, many times just for the sake of sticking together. But I can’t tell you how glad I am today that we did stick it out despite those really cursed years. It’s funny how breaking a curse can change things. Happy things happen now, and we’re happy, not so happy things happen now… and we somehow manage to still find happiness, in each other. Nothing is perfect, and we’re just as not-perfect as everyone else, but we’ve found joy in our not-perfect-ness though. 🙂